Note: Accerion was included in this overview of European Robotics Startups by seed + speed Ventures. This post was published on Medium on April 15, 2021.

Over the past few decades, roots have gone from incredibly expensive machines with limited functionalities to affordable robots that are flexible and equipped to do multiple jobs. Consequently, robots are highly adopted by people across the globe and various different industries and play an increasing part in our daily personal lives.

As in many other segments, Covid has offered challenges and a major opportunity to robotic firms, especially in the logistics and grocery space. Unforeseen stress tests to supply chains and surging demand on products have emphasized the need for greater supply chain efficiencies. Workforce constraints due to safety protocols and illness have also hammered various sectors.

Robots are surely not new, however rapid technological enhancements and developments like IoT, 5G and AI, are heavily increasing adoption of robotics engineering and technology as well as a growing number of use cases and applications.

To get a better understanding of what’s going on throughout the European robotic startups ecosystem and to identify its trends and challenges, we took a closer look at more than 100 companies from the last seven years (founded 2013 or later).

Among the companies we observed, we spotted more than 50 relevant ventures, active in the field of robotics, which we mapped into the following six categories (Industrial, Wearable, Light Duty, Software, Medical, Food & Farming).

Throughout our research we identified 58 companies of which more than 50% (unsurprisingly) fall into the Industrial segment (52%, 30 companies), followed by Medical (16%, 9 companies) and Light Duty (12%, 7 companies). The overall number of startups founded in the robotics industry seems rather low compared to other industries. Potentially, this might be due to its deep-tech character and the associated capital requirements as well as the research-intensive nature. 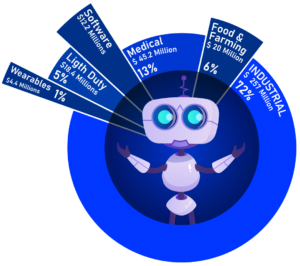 Taking a closer look at the founding years, we saw founding activities peaking in 2015. Although that does not account for the fact that we are only looking at companies still operating today, it nevertheless shows that startups founded in that year seem to be particularly successful (at least measured by the capital they attracted). We also saw the number of new startups founded since 2015 decrease, which could be attributed to the capital needed to start a robotics business and the challenges to scale and compete with already existing competitors. 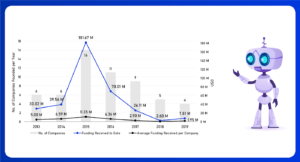 Overall Trends in Robotics
While analyzing the startups we have identified and mapped above, we also took a closer look at the trends and innovations that are currently shaping the robotics industry. The following include our key observations:

• Autonomous Robots
Autonomous Mobile Robots (AMRs) are transforming traditional robot tasks through their increased flexibility and diversified applications, including their unique ability to navigate in an uncontrolled environment with a higher level of understanding.

• Collaborative Robots or Cobots are on the rise
Collaborative robots (a.ka. cobots) are a special form of robotic automation built to work safely alongside human workers in a shared, collaborative work environment. A collaborative robot not only frees humans from repetitive tasks, but also prevents industry workers from getting involved in critical and dangerous tasks. Industrial collaborative robots are designed with advanced sensors and software that allow them to detect and react to any human intrusion into their workspace.

• Robot senses improve drastically
When combined with powerful processing capabilities, tools like force control and advanced 2-D and 3-D vision will enable an increasing degree of robotic independence and allow the robot to make decisions about what to do when it encounters unforeseen problems in their day to day operations. Therefore, one of the key features needed is a robot that can interact with the world around them. To make this long vision come true, researchers and scientists have included advanced sensing and gripping tools into industrial robots, which power charge their senses.

• 5G will fuel adoption of robotics
Mega-trending 5G is poised to deliver unheralded speed and bandwidth and with such enabling real time visibility and processing of high data volumes bringing adaptability and flexibility of robotic automations to a new level. This will not only increase efficiency of existing applications but also enable totally new use cases in the smart factory stack.

• The next level of robotics in manufacturing
Manufacturing production lines are already largely automated by industrial robots. The next step for these facilities will be to adopt robotic technology that enhances the efficiency of the material handling workflows that support the production lines by using autonomous mobile robots, powered by self-learning capabilities, working perfectly synchronized along the supply chain.

• Robots are the farmers of the future
One of the most transformative potentials for robotics lies within agriculture. Based on widespread labor shortages this sector is absolutely predestined to benefit from robotic solutions. Furthermore robotic solutions contribute to a more sustainable industry, e.g. Ecorobotics mounted sprayer which drastically reduces the use of chemical products.

Overall the future of robotics seems more than bright and we hope to see a lot more robotic startups come to life in the near future. If you are interested in this particular space, thinking about starting your robotics business or raising capital for your (early stage) company feel free to reach out.

seed + speed Ventures is a seed investor focussing on B2B software startups in Germany, Switzerland and Austria. As a lead or co-investor, seed + speed initially invests up to €500k in its portfolio companies and supports the development of sustainable, successful sales structures through tailored sales coaching by in-house sales trainers. Thus seed + speed actively adds value to the operational business of its portfolio companies to enable faster growth.