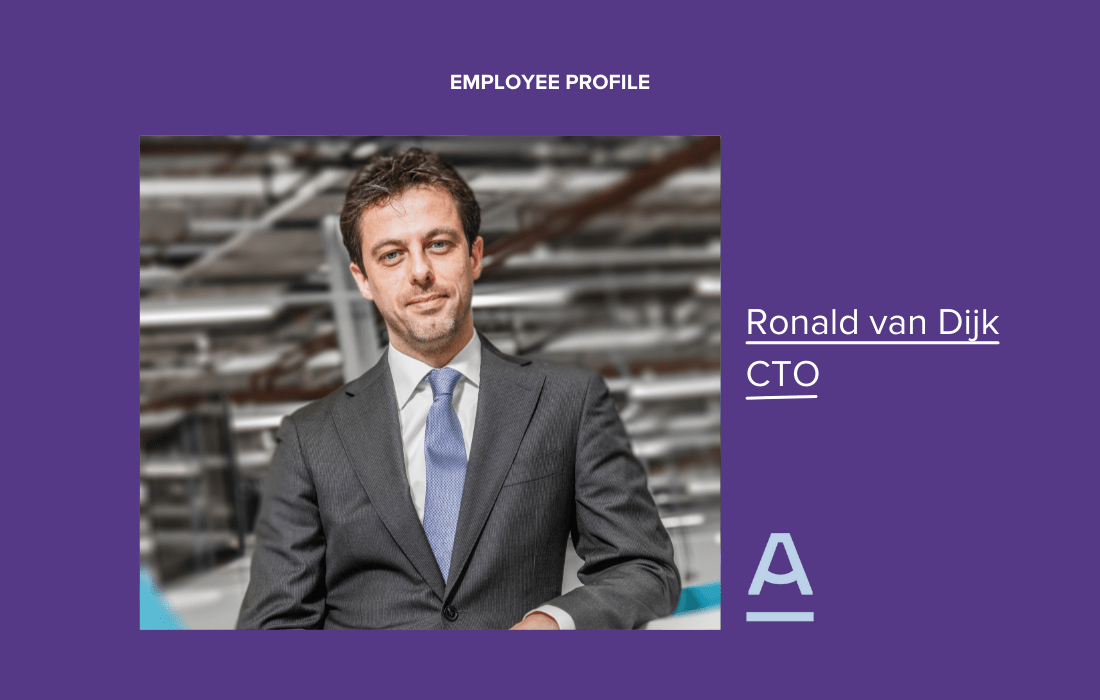 Just so you know, Accerion CTO Ronald van Dijk isn’t in it necessarily for the money. He’s in it for the thrill. For the excitement of defying the odds and turning concepts into market leaders.

Road racing super-sport motorcycles in the national championship was his hobby for 11 years before switching to drifting cars, so it figures that, in the business world, this translates into Ronald going for the thrills, chills and satisfaction of changing the world at an emerging cutting-edge tech company.

This is not a recent development.

Though Ronald started at global tech innovator Philips, where he did work related to ASML’s semiconductor advancements, what he thrives on is working in an environment with disruptive technology, a focused team and a ground-floor opportunity at a really fast- moving company. “Yeah, that’s irresistible to me,” he says.

As an Eindhoven native, he had plenty of opportunities to feed that passion for tech and innovation:

I started out at Philips. If you live in Eindhoven, you should work at Philips. I was fortunate to work in their applied technologies department, so I was always working on ASML and FEI projects. That kind of technology. So really, really high end. I was very fortunate to have a two-year traineeship in precision engineering and control systems.

Gradually, he gravitated toward internal startup teams at the NTS Group, including leading the FEI Phenom Scanning electron microscope (SEM) development team at NTS Mechatronics. Even in the corporate world, Ronald was all about startups and the next tech wave, always believing the career rewards would outweigh the risks.

Then Ronald really decided to jump off the high-dive. Ronald knew what he was getting into when, in the interview, his prospective employers asked him, “Your wife does have a job, right?”

Like so many startups, SoLayTec was a great idea with “a small bag of money,” he said. But it turned out to be just the jump-in-and-do-it culture he was looking for – big plans, big ideas, big ambitions and a small team. It was that rocket ride of Day One, rent office space; Day Two, get furniture; Day Three, buy computers; Day Four, hire personnel “on this crazy timeline.

“I really had a good time!”

He spent eight years helping build the company as the chief technology officer working with great teams developing great products in the emerging solar energy sector. Unfortunately, after the rise and rise of SoLayTec, it caught up in the boom-to-bust cycle as Asian competitors took market share and the company was acquired.

Ronald says he left knowing he and his teams had introduced a new standard in solar cell concepts and more than 3 billion high efficiency solar cells manufactured on SoLayTec equipment alone in the process. And knowing he “thoroughly enjoyed working at startups.”

Ronald came to Accerion about 18 months ago as an engineering manager who was quickly promoted to CTO. With his background in precision engineering and mechanical engineering, he brings a way of working and a depth of knowledge and experience that dovetails perfectly with Accerion’s talent pool. Though he has experience in technology development, he acknowledges a steep learning curve to master computer vision and robotics.

The good news is, he’s in with a bunch of other over-achievers: “Yeah, I’ve heard that before. I’m not offended in the slightest.”

Ronald attributes much of his integration into Accerion’s culture to colleagues, “a great team of highly skilled developers who took time out of their schedule to patiently get me up to speed.” Ronald is leading Accerion’s push into new market niches including Goods to Person intralogistics applications. This is a market U.S. tech research consultancy Gartner projects will quadruple in value by 2023 due to the shift from retail to online shopping, an unexpected trajectory experienced during the coronavirus pandemic.

“It’s performing better and better each day,” Ronald said. “The ramifications in terms of applying this technology are huge … logistical robots. Home care robots. The applications are close to endless.”

That explosive growth is attributed to the company culture which attracts the brave and talented … like Ronald.

The team has doubled in size since the end of 2019, and they are hiring seven more team members, including software engineers, customer success engineers and business developers.

Unlike in the corporate world, working at a small, relatively new company is all about fit and company culture:

There has to be click … you basically invest in the team, because at the moment, the team is the company. It has to be a team effort. You have to be focused. You have to be flexible. You have to juggle, which is the nature of startups. The peaks are high, the valleys are deep, and not everybody has the stomach for it. But let’s say you have to have that mentality. We’re focused on open culture-oriented people.

The nature of startups is team members are sure they’re going to conquer the world with their unique proposition, Ronald said: “That youthful exuberance … that’s something you need.

“We just want to conquer the world … nothing more.”