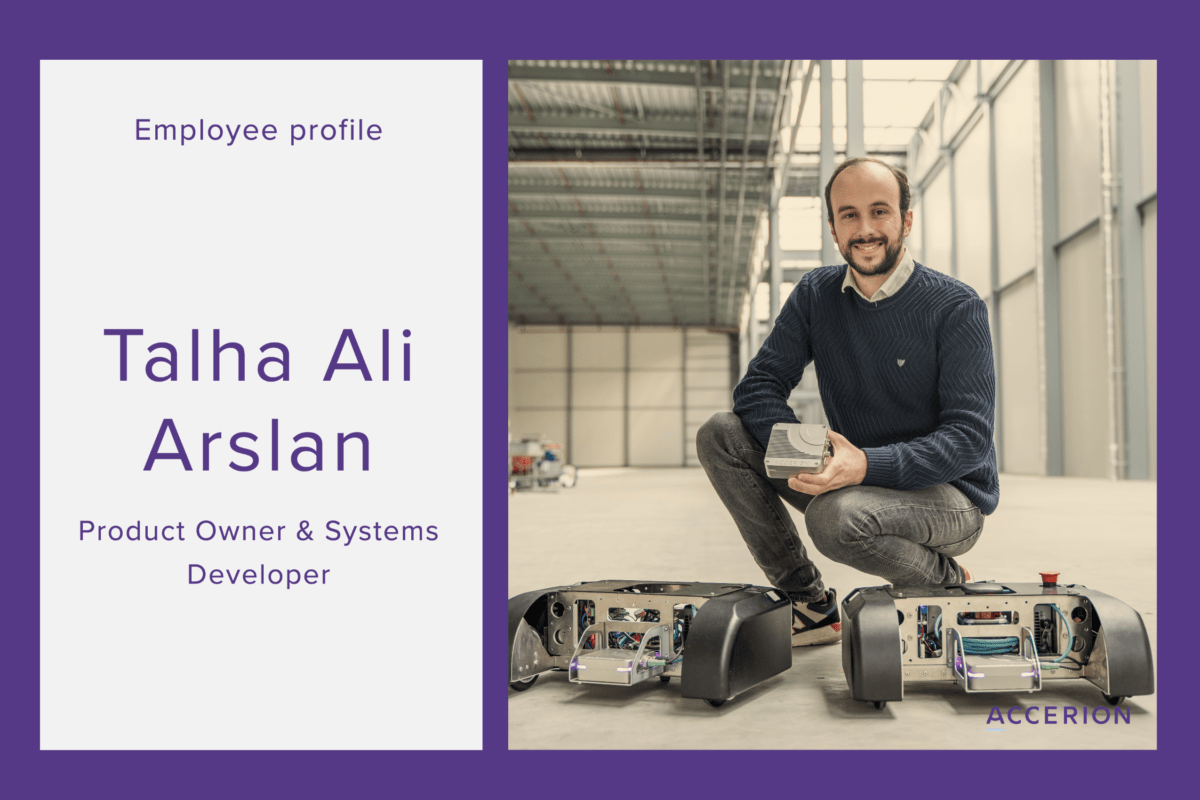 In the first month he joined what was then only a promising robotics positioning startup, Accerion took the young engineer to an innovation and technology trade fair, then put him on stage when Accerion received the innovation award. Then, the emcee asks him what he thinks about robots taking over jobs of people.

In Dutch, which he couldn’t speak or understand at the time.

He repeated the question to Talha in English: “Do you think it is a problem that your technology will make a couple of people unemployed?”

“So, I needed to come up with an answer very quickly. My answer was, ‘No, I don’t think so, because with the advances in these types of technologies, there will be more jobs in new fields for people to work on. I think these can actually improve working conditions of some people, while creating opportunities and openings in new fields too.’

“Now I wonder at how many companies would you have the chance to go with the founders, then end up on stage accepting an innovation award in your first month?”

And then there was that time Accerion founder Willem-Jan Lamers handed him one of the early Accerion positioning modules along with a bunch of components and told Talha, “Okay, here is the prototype. Here are the parts for the second one. The second one will go to the first pilot customer. Can you assemble the second one looking at the first one?

“It was like IKEA … like an IKEA assignment without any instructions, and on top of that, I had to assemble some electrical and optical components, which I have seen for the first time in my life.” Talha says. But it was also indicative of how much faith Accerion management has in his skills.

“They trusted me, based on the fact that I was a generalist engineer interested in hands-on things,” Talha says. “So, I should be able to do that; take apart the first prototype without permanently damaging anything, put it back together properly and then assemble our second working prototype.”

If anyone is going to survive this kind of creative whirlwind startup, it’s going to be him. That Accerion chose this robotics fanatic – and he chose an advanced robotics positioning company – was destiny. Both have advanced far faster from the symbiotic energy.

Since 2016, Talha has witnessed Accerion go from Version 1.0 of the company, a young, ambitious startup, to a fast-growing tech company with 20+ employees; a company that’s expanding globally in a very advanced robot positioning niche.

Triton, the company’s latest positioning system for mobile robots, consists of an optical positioning sensor, an integrated processing unit and advanced algorithms. Triton uses the warehouse floor as a map to provide coordinates to the navigation system so robots can localize themselves in the environment, ensuring state-of-art repeatability in positioning. Triton turns mobile robots into high-performance, highly accurate and robust autonomous vehicles without infrastructure.

“Using only the existing floor surface to localize with sub-mm repeatability and to do this without infrastructure is a game changer. With an infrastructure-less positioning system like ours, the scale of required investment to adopt robotics and automation gets within reach of businesses with any size.”

Turns out he was as well prepared for the ride as anyone could have been.

Born in Turkey, Talha went to Robert College in Istanbul for high school, mastering English along the way. Following his bachelor study at Boğaziçi University in Istanbul, he ended up at Technical University of Eindhoven because he wanted to study control and robotics.

Talha relaxes by – you guessed it – exploring new technologies through hobby projects. He’s always been like that, which is what led him to Accerion.

Talha was considering positions through Nobleo, a tech recruitment firm in Eindhoven. Working though the placement agency, he could work on different projects and not get bogged down in a corporate routine. Those Nobleo contacts told him about Accerion, “they’re looking for someone like you and you have our blessing. If you want, you can talk to them directly.”

So, he meets Willem-Jan Lamers and Vincent Burg, now Accerion’s CEO, through Nobleo, joining the startup in April 2016.

Working at Accerion has meant non-stop skills acquisition in computer vision, indoor localization, robotics, system integration, design and architecture, Talha says. In the past years, he’s learned a lot from customers. “That’s why I suggest new hires join the Customer Success Engineering team or visit customers occasionally, so they work directly on the field and experience the real use cases first-hand,” he says.

Customers are happy to give performance feedback and are NOT worried about hurting your feelings. The fact that he previously only had a background in robotics and control systems via research institutes and universities didn’t stop him from working with suppliers and customers to integrate, test, to trouble-shoot issues such as software bugs and to tweak and assess products.

“And that openness and honesty are also very useful for you to develop and fix the problems with the product that you’re offering them,” Talha says.

In fact, early on, the way prospective customers at industrial shows and trade fairs engaged with Accerion technology convinced Talha that Accerion was for real and there was a career here. “The fact that people were getting fixated on this sensor … playing with it and trying to mess with it,” he says. “Trying to put their hands or feet under the sensor to see if it would fail … that gave me more and more motivation to take this to the next step.”

Having Accerion on his resumé as Employee No. 1 is a great boost, Talha says. It makes him “an independent creator of new products and features,” which include hardware and software.

Developing vision, robotics and positioning systems has made him confident he can tackle any technical issues he’s given, he said, even if it’s outside his field of expertise.

“Accerion and our customers have provided me with enough problems and space to get to know myself professionally. It is not only a joy to be creating novel technical solutions and seeing them in action so quickly; it is also a great enabler to be aware of your strengths and skills to improve. And you get to go through this journey with a great group of people.”